Ordnance Survey’s (OS) analysis of almost 400,000 public routes created over the past twelve months in the digital map and planning tool OS Maps has revealed that the Peak District is currently the most popular destination to create routes for.

Press OfficeSharing the latest news about OS. We can licence you to use OS maps in print, online and film format. For more information and resources for journalists, bloggers and media professionals, email pressoffice@os.uk or call 023 8005 5565.
Natural environment
Leisure

OS, by breaking the country down into square kilometres and counting the number of routes passing through each square, has produced a league table that sees the Edale area of the Peak District occupying six of the top ten spots, with Snowdon’s summit comfortably taking the top spot by some distance. The Lake District’s Scafell Pike summit and Ambleside appear at number three and five respectively. 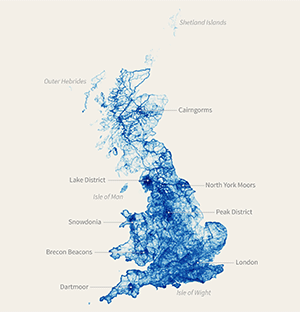 A series of stunning data visualisations showcase the results. See them all on our Flickr page: https://www.flickr.com/photos/osmapping/

Nick Giles, Managing Director of Ordnance Survey Leisure, says: "It may be a relatively small island we live on, but it’s crammed with variation and beauty. I think this is reflected in these tables, there is a nice geographic spread – though it would be nice to see more routes being created in Scotland. The Peak District is up there with any place in the world, and Edale, its village and valley, is a vast and stunning part of the country. With its easy access from Manchester and Sheffield, and it being either the start or end of the Pennine Way, depending on which way you’re walking it, it’s easy to see why it features so heavily in our league table with almost 21,000 routes."

Assuming each of Edale’s routes takes an average of an hour, it would take one of its 353 residents 875 days, or 2.4 years, to complete every walk. It would take the entire village 846 years to do this.

Nick continues: "Over the past twelve months we have introduced some key features to OS Maps, such as 3D route planning, to make the outdoors enjoyable, accessible and safe for all, and we have some exciting things coming up in development. The app now contains almost 1.2 million private and public routes, it is one of the largest databases of its kind in the world, and it’ll be interesting to see how much this league table changes next year."

OS has created another league table to establish the most popular towns and cities to create routes in. To conduct the analysis OS has looked at the full extent of the towns and cities rather than the square kilometre method, hence why Ambleside, which appears in both tables, has two different number of routes. What stands out in this league table is London boroughs Richmond-upon-Thames appearing in third spot and Wandsworth in sixth. Though when cross-referenced with the recently added OS Open Greenspace data it may not be so surprising, as Richmond-upon-Thames, percentage wise, is by far the greenest of all London’s boroughs with 323 greenspaces, and Wandsworth is not too far behind with 294.

Nick continues: "As well as those two London boroughs, Guilford, Winchester, Sheffield and Bath also feature in the top ten. Is this reflective of increasing numbers of people exploring and adventuring closer to home? I hope so. Certainly, the greenspace map layer we launched earlier this year within OS Maps will help with that. Encouragingly though, what this all demonstrates is our nation’s never-ending love for being outside."