You may know about our trig pillars, but did you know that there are more nostalgic reminders of how we used to map Great Britain? Have you ever seen one of these while you’ve been out and about?

If so, it is highly likely you have spotted one of our renowned benchmarks. 2018 marks 25 years since the last traditionally-cut arrow style benchmark was carved on a milestone located outside The Fountain pub in Loughton.

While trig pillars were used as accurate fixed points for mapping coordinates in the National Grid, benchmarks were fixed points which were used to calculate a height above the mean sea level. Benchmarks have been around for a long time, much longer than our trig pillars. While the first systematic network of levelling lines and associated benchmarks was initiated in 1840, some benchmarks in our archive date back to 1831.

The horizontal marks are used to support a stable ‘bench’ for a levelling stave to rest on – hence ‘benchmarks’. This design ensured that a stave could be accurately repositioned in the future and that all marks were uniform.

There were over 500,000 benchmarks created, but this number is reducing as roads change and buildings are demolished. Greater London has almost 18,000 benchmarks as well as large clusters in Leeds, Bradford and Birmingham. On the GB map below, you will see that they are largely concentrated in urban areas and mostly along roads or on the side of buildings and walls.

There aren’t as many in the Scottish Highlands, mid-Wales or Northern England due to the hilly terrain. There are 18 benchmarks on the tiny island of Lundy, 66 on the Isles of Scilly, 1,313 on the Isle of Wight and 692 around Shetland (although our records don’t show any benchmarks on Foula or Fair Isle but they do have trig pillars).

How we survey today

The benchmark network has had little maintenance for 30 years and in some areas (mining areas for example), subsidence has affected the levelling values. In these regions the BMs cannot be relied upon to accurately define the ODN (Ordnance Datum Newlyn – mean sea level determined at Newlyn in Cornwall).

Today, access to the national height reference  is through the OS Net permanent GPS stations (this post explains the technicalities in more detail). The advantage of using this method is that anyone with accurate GPS can access the height system anywhere.

Geolocating trig pillars (often termed trigpointing) has been a hobby for many, but some have sought out benchmarks too (aka benchmarking). Here at OS, we have created a map of all the benchmarks in Great Britain. 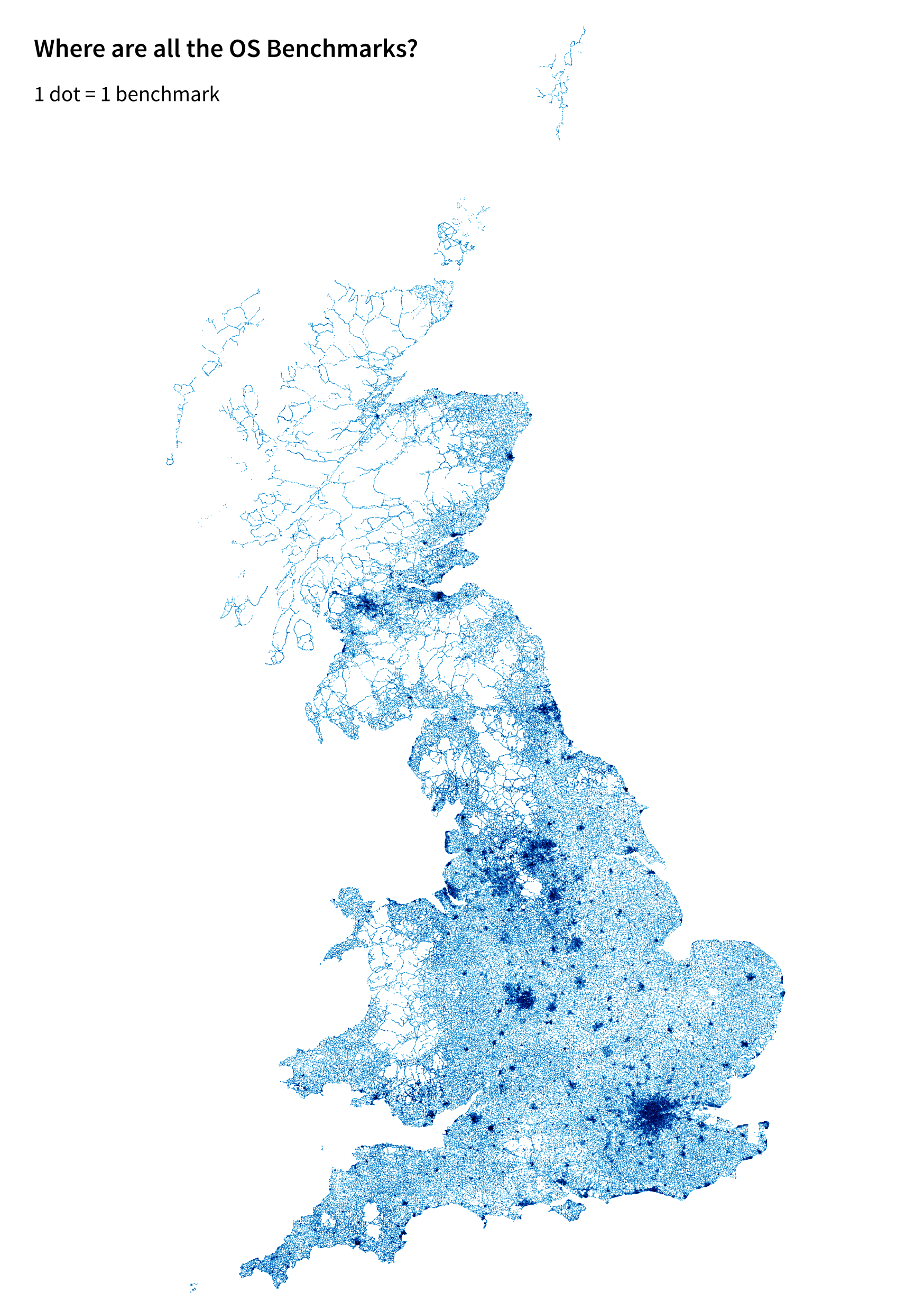 Find out more about the different types of benchmarks and have a read of our archive. You can download the full archive of benchmarks from our website: https://www.ordnancesurvey.co.uk/benchmarks/

We thought we knew a fair amount about the humble trig, but we bow to ...

We thought we knew a fair amount about the humble trig, but we bow to the amazing knowledge of Britain’s top trig-bagger, Rob Woodall.