Over the last few weeks, we have been celebrating the 70th anniversary of National Parks across the UK. OS's Graduate Technical Relationship Consultant Katherine Featherstone created something special to mark the occasion.

This week I will explore the Peak District National Park which is situated in the heart of England and is the UK’s first National Park being designated on 17th April 1951. The changing landscapes throughout the park from steep limestone dales in the White Peak to the gritstone edges in the Dark Peak and rolling hills provide a great playground for visitors and the 20 million people in the UK who live within just an hour of the national park.

Having spent time in the Peak District this summer, I was excited to visualise the iconic landscapes and create ‘postcards’ showing areas loved by visitors each year and capture just some of the 1,600 miles of public rights of way. These are available to view on the OS Flickr account.

The idea to create a 3D scene to take ‘pictures’ around the park was ignited by a visualisation created by Sean Conway for the cover of Rouleur which shows a 3D image of the Swiss Alps using elevation data with a map over the top. I loved how the power of GIS could be used to create a 3D image which resembles landscapes we know and love. 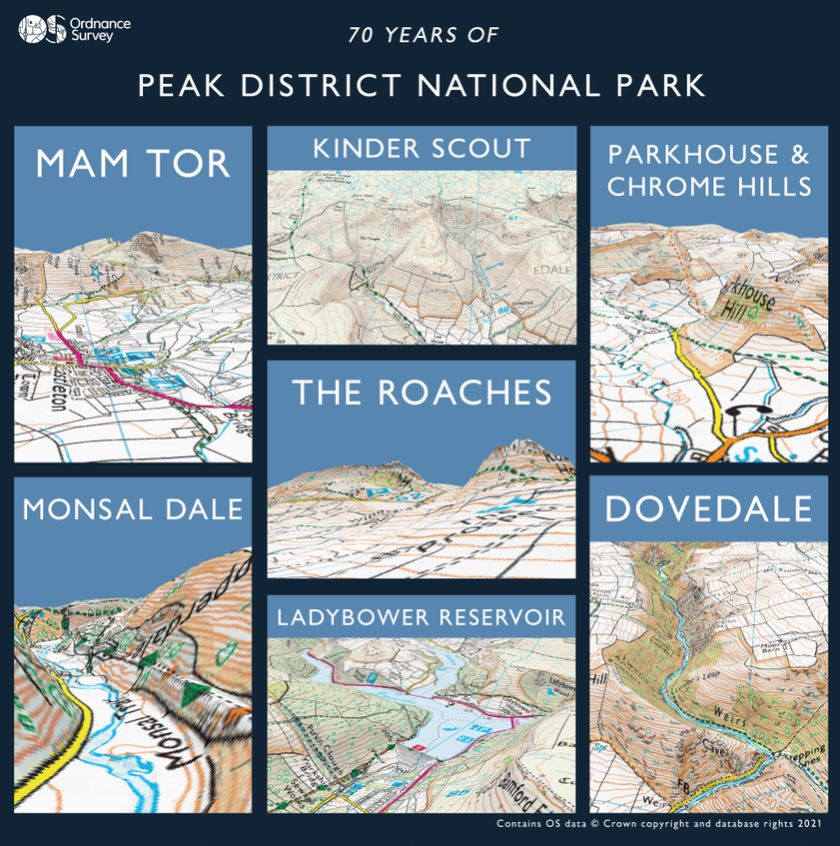 I started by creating an ESRI ArcPro project to input elevation data from OS Terrain 5, or alternatively it could be done by using OS Terrain 50 which is open and free to use. Both datasets can be found on the OS Data Hub. Using a shapefile of the Peak District National Park all data was clipped to the park boundary. The clipped data can then be added into an ArcScene to provide the underlying terrain in which other layers can be overlain.

Now you have the base elevation layer, it's time to input the ‘surface’ layer. For these visualisations, I decided to use OS 1:25 000 Scale Colour Raster as I wanted to visualise the well-loved paper maps in 3D. To best use this data, I added it first into the ArcPro Project to merge the required raster tiles together before then clipping the merged tiles to the Peak District boundary shapefile. Then by simply adding this to the ArcScene, you can start to see how your 3D visualisation looks. Exploring the vertical exaggeration is important to ensure that the scene resembles the true landscape. In this case, I found a vertical exaggeration of 2.0 was appropriate.

In ArcPro, you can create an ArcScene layout to export the final 3D images. Simply explore the scene and line up the display to the angle you want to show. Then once it is how you like it, use that map within the layout view, adjust accordingly and then export the layout when you are happy with it. I found it took lots of little tweaks to get just the right angle, especially when the dataset is a bit larger than what my laptop could handle! By also changing the ArcScene background colour to blue it enables the illusion of the sky to be created. Alternatively, another blank map can be used as a background layer in the layout window to edit to the desired colour. After exporting all the images for the postcards, I used photoshop to add text and any finishing touches.

It has been great to showcase National Parks over the last few weeks and celebrate their 70th anniversary’s. Hopefully on the postcards you can recognise footpaths and places you have explored when out seeing what the Peak District has to offer!

OS explains the cartograhic process behind its monochrome map of Dartm...

OS explains the cartograhic process behind its monochrome map of Dartmoor National Park.