As a self-proclaimed outdoor enthusiast, it’s no surprise our guest blogger Dan Harris is a Forward Planning Manager at the Cairngorms National Park Authority. In his spare time, he used our data to create a 3D LEGO map and in doing so, enthused many Twitter users. Here, he tells us about the project…

LEGO is an extremely engaging medium that can generate great enthusiasm in almost any subject, whether the audience is young or old. There are hundreds of examples of its use to promote subjects such as history, philosophy, economics, science and more, so I wanted to bring it to the world of cartography and use it to inspire engagement with mapping, landscape and place.

I’ve always really liked the way 3D relief maps can quickly and often dramatically convey the geography of an area. They’re popular and inspiring so to me, LEGO seemed like the ideal material from which to make my own; and where better to make one for than Scotland? With its mountains, islands and intricate coastline, it seemed to me to be the ideal subject. Plus, I live there and if it’s going to be displayed in my house, I want it to mean something to me.

One of my main objectives was to make the map using open data, so OS’s open datasets were an obvious solution. While I did consider other options, I decided that OS Terrain 50 DTM best suited my needs. To be fair, OS Terrain 50 is total excessive for a model of the resolution I had planned, but I wanted to use it so that in future I could create more detailed maps without having to process loads of new data. My map also includes a part of Northern Ireland, so I used the ALOS World 30m DSM to fill in that gap. Watercourses data came from the OS Open Zoomstack dataset, which is a great source of open data.

I used QGIS to process and combine the OS Terrain 50 data into one dataset for the whole of Scotland. I did this to create a map with a discreet colour ramp at 250m intervals using the RGB codes for official LEGO colours. The map was exported as a high-res PNG to be used in the next stage of the process. This was the full extent to which I used GIS software in the process.

In order to create the LEGO mosaic pattern you can see, I inputted the PNG into a piece of third-party software called Brickaizer. There are lots of apps and programmes that do this, but Brickaizer is probably the best. The output for this is an Excel spreadsheet which provides a parts list and pattern to be recreated in LEGO. While the pattern is useful for this project, for two reasons the parts list is not. Firstly, the software is designed for photos and while the result isn’t bad, it lacks the precision required for a map so a fair amount of editing is needed to get the pattern just right. Secondly, the output is a single layer of parts; I wanted the map to be 3D, so I needed a pattern for each of the 250m intervals contained within the PNG.

It was at this stage that I decided to court controversy and put Shetland in a box. I was able to estimate that the additional parts and framing costs would be in excess of £500 and as the map was already costing around £1,500, the additional cost wasn’t something I could afford or justify. In more practical terms, I have nowhere in my house where I can hang a larger map! A solution could have been to adjust the scale so that the map fit a smaller area, but this would have meant losing a lot of detail and a product that I’d be a lot less happy with in the end. Of course, I should point out that I’m not a Scottish Minister and therefore I can do whatever I like with Shetland, but in every other map I’ve made of Scotland I’ve placed Shetland where it’s supposed to be; cartography is always an exercise in compromise.

To convert the map into 3D, I decided to build it as a digital model in a piece of software called Stud.io, which is used for designing and creating 3D LEGO models and instructions. This also had practical benefits. Firstly, it enabled me to create a set of instructions to follow when physically building the map and secondly, as the software is linked to BrickLink, an online marketplace for LEGO pieces, it enabled me to pick the most cost effective parts to use as well as create a ‘wanted list’ that could be uploaded straight to the website.

The final step was to build the map with real LEGO by following the instructions I created in Stud.io. For the final touches. I had some parts custom printed with text for the legend, scale bar, longitude and latitude. I have some ideas to streamline the process for my next map, but for now, I present LEGO Scotland! 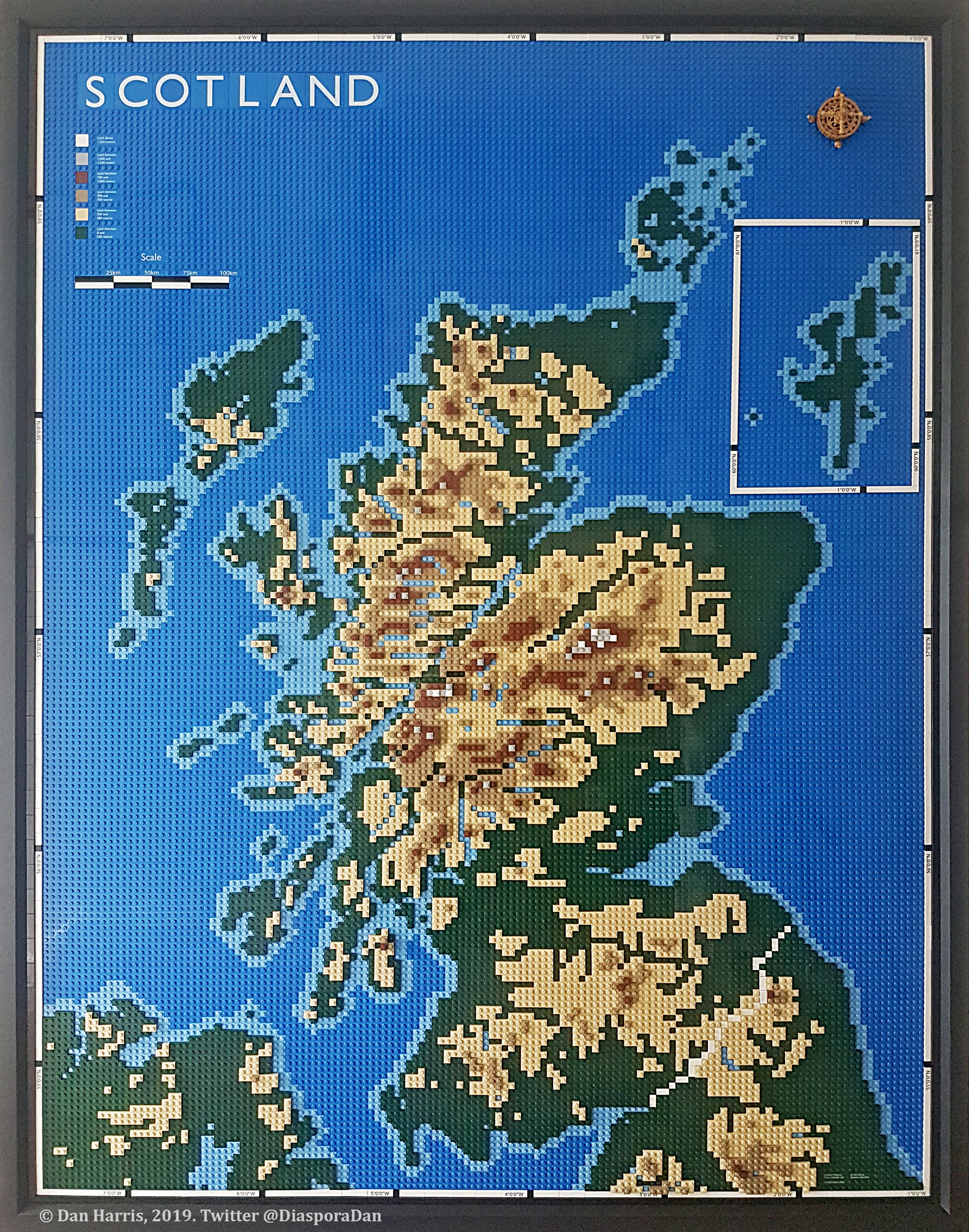