While 2018 marks the 227th anniversary of Ordnance Survey, lest we forget it is also the 82nd anniversary of the first observations from our ‘hotine’ trig pillar! If you want to find out who created our well-known trig pillars and the memorial we have for him at our head office, you’re in the right place.

Brigadier Martin Hotine CMG CBE RE was born on 17 June 1898, in Wandsworth, London. He read mathematics at Magdalene College and was then commissioned into the Royal Engineers (RE). Hotine was in the RE for many years and served in both the First and Second World Wars.

Hotine was quickly recognised as a brilliant mathematician, and by the late 1920s he was assigned to the Air Survey Committee of the Geographical Section of the General Staff (GSGS) at the war office. As a captain in the RE, he worked with other mathematicians on some of the problems associated with the graphical methods of surveying topographic information from vertical air photography. Hotine’s work was published in 1931 in a series of professional papers on behalf of the Air Survey Committee.

In 1931, Martin Hotine was posted to Tanzania until 1934. Returning to Britain, in early 1935 with the rank of Major, he headed up the Trigonometrical and Levelling Division at OS. Here, Hotine made the contribution for which he is best known.

Hotine was the person responsible for the design, planning and implementation of the re-triangulation of Great Britain on which OS maps are still based. During this inter-war period, he designed the iconic and much-loved trig pillar which is still found now on many hilltops and in the countryside across Great Britain. As if that weren’t enough, he also had a big influence on the development and use of photogrammetry (aerial imagery).

During the Second World War, Hotine spent several years commanding the geographical department and was responsible for the army’s maps and the RAF’s aeronautical charts.

After the war he became the founding Director of the Directorate of Colonial (later Overseas) Surveys (DOS) which he held until retirement in 1963. During this role, he had a profound influence on both surveying and mapping within the Commonwealth.

In 1947, the Royal Geographical Society awarded Hotine their Founder’s Gold Medal for research work in air survey as well as his cartographic work. In 1955, he received the Photogrammetric Society’s first President’s Medal and in 1964 the Institution of Royal Engineers’ Gold Medal. In addition, he was also honoured with the award of Commander of the Order of the British Empire (CBE) and also with Companionship of the Order of St Michael and St George (CMG) in recognition of his overseas work.

Brigadier Martin Hotine’s life and work are also commemorated in a lecture held every four years at the Cambridge Conference. So much so that during 1971’s conference, his long list of contributions was honoured with a plaque and stone. It was named the Hotine Memorial Stone and was originally housed at our old head offices at Romsey Road in Southampton.

When we moved to Explorer House, Adanac Park in Southampton in 2011, it was only right our Hotine Memorial Stone made the move with us. The stone was installed as we wanted to commemorate the impact Hotine had on the progression of OS as GB’s national mapping agency. In relocating it, we refurbished it and arranged a celebratory ceremony with members of his family present.

Below is how it looks today.

May his legacy live on through this memorial stone as well as in the trig pillars we can see all over Britain. 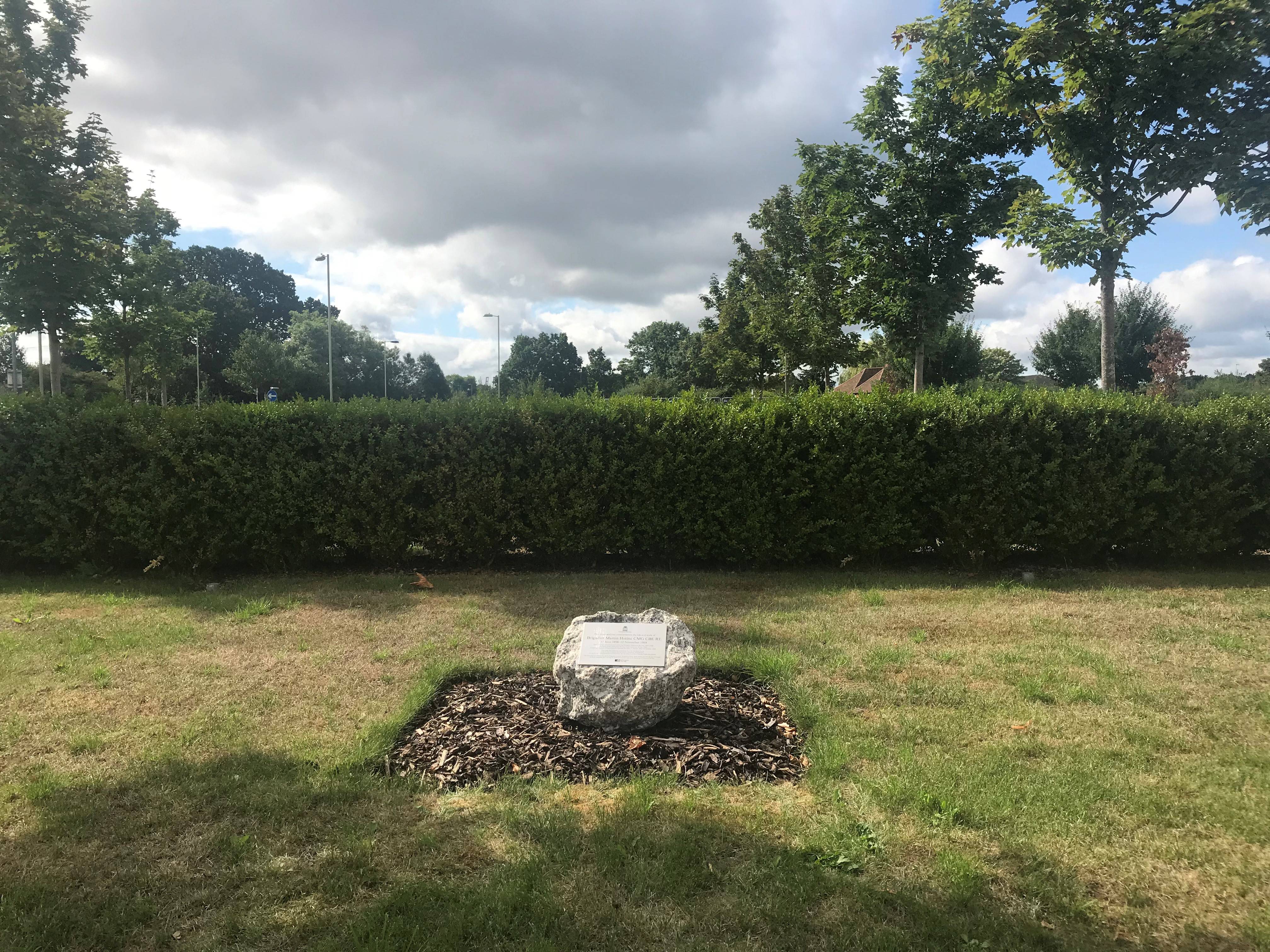 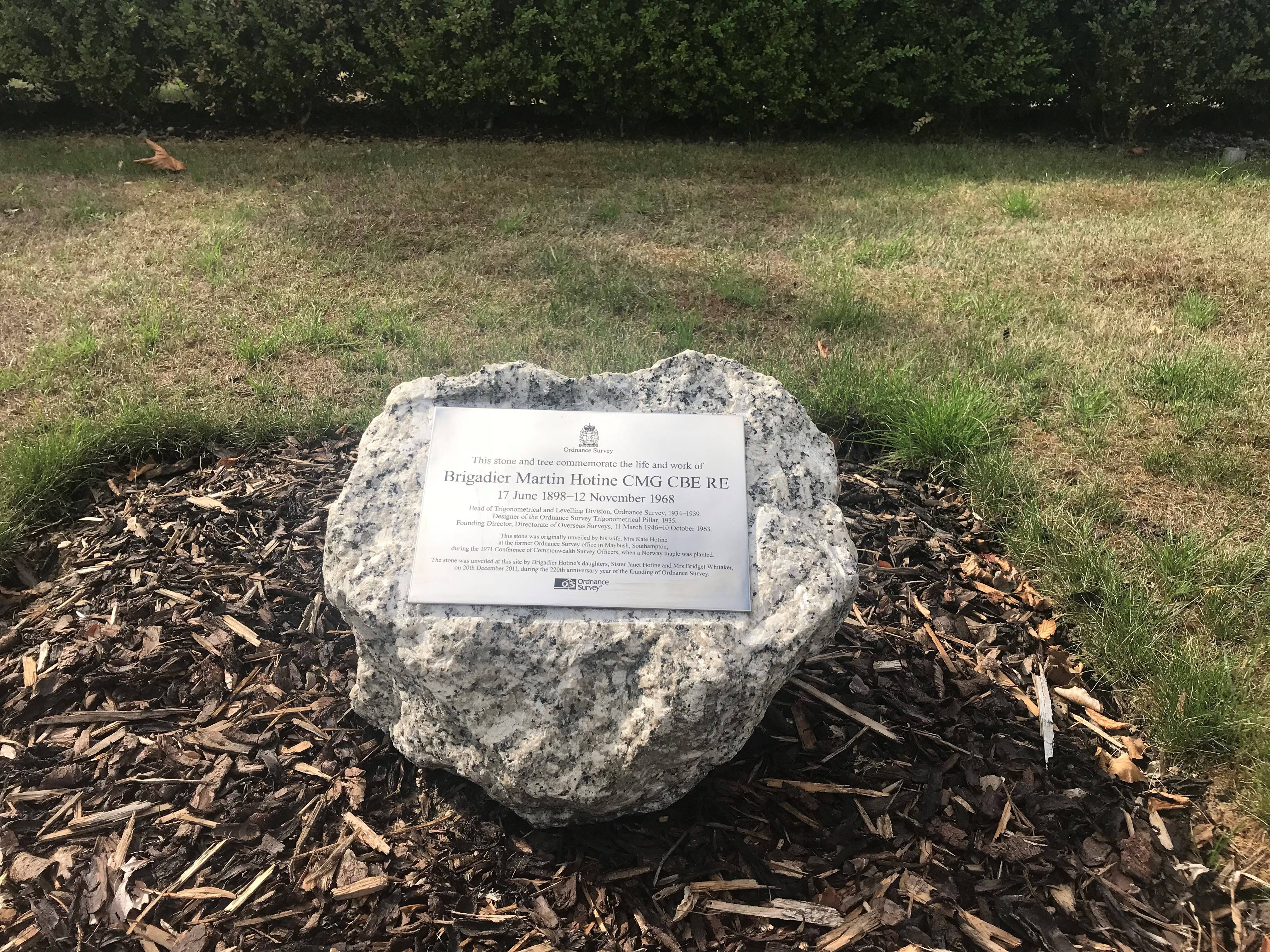