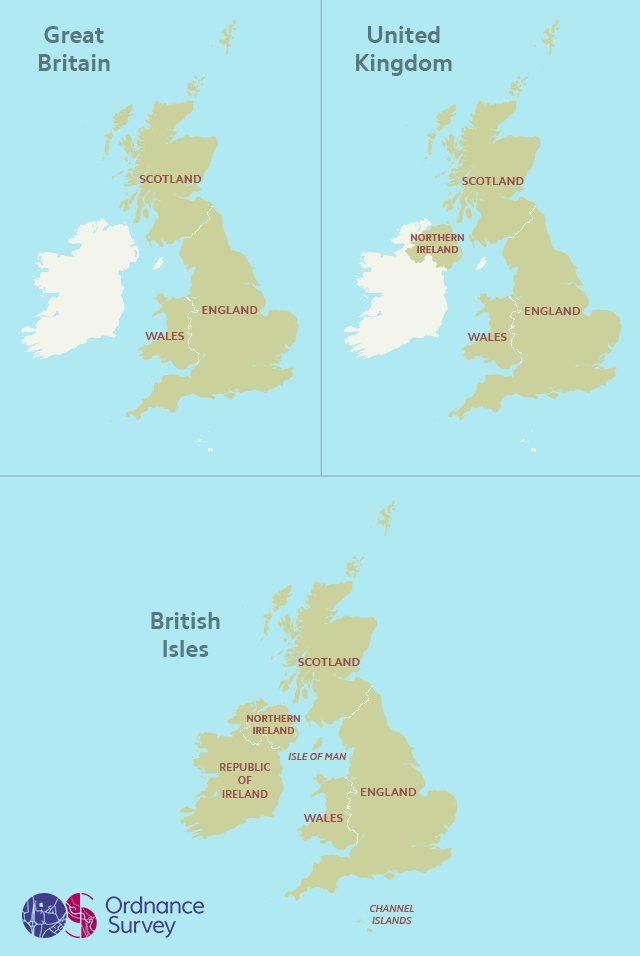 One of the most common mistakes people make when talking about geography in this country is to confuse the UK with Great Britain or the British Isles – a cardinal sin in the eyes of any true geographer!

So let’s clear this up once and for all…

The United Kingdom of Great Britain and Northern Ireland (to give its full name) refers to the political union between England, Wales, Scotland and Northern Ireland. The UK is a sovereign state, but the nations that make it up are also countries in their own right.

The Channel Islands and Isle of Man are not part of the UK, but are Crown Dependencies.

Great Britain is the official collective name of of England, Scotland and Wales and their associated islands. It does not include Northern Ireland and therefore should never be used interchangeably with ‘UK’ – something you see all too often.

Here at Ordnance Survey, we’re responsible for mapping Great Britain, which is why we don’t make maps of Northern Ireland.

This is purely a geographical term – it refers to the islands of Great Britain and Ireland – including the Republic of Ireland – and the 5000 or so smaller islands scattered around our coasts. Remember this only refers to geography, not nationality, and while the Republic of Ireland is part of the British Isles, its people are not British – a very important distinction.

I hope that’s explained the very different meanings between UK, Great Britain and British Isles and why it’s important to use the right name at the right time. Geography really does matter!

We’re 225 years old today and what better way to celebrate than with t...

From checking the extent of a dismantled railway to updating building ...

We’re 225 years old today and what better way to celebrate than with two new maps created in a historic style?

From checking the extent of a dismantled railway to updating building functions for OS maps, no two days are the same for an OS surveyor.