Automating base maps in Zambia – one year later.

In 2021, Ordnance Survey (OS) helped support the creation of an automated, digital base map of Lusaka, Zambia. We worked in partnership with the Zambia Ministry of Lands and Natural Resources, Zambia Ministry of Local Government, International Growth Centre, and Commonwealth Association of Architects.

A base map is a valuable tool in understanding and analysing socio-economic growth, and Africa is urbanising at the fastest rate in the world. Unplanned urbanisation can lead to poor quality of life, as increased development of informal settlements requires retrofitting infrastructure – water, electricity, sewage – which is more expensive. Therefore, a means of better understanding Lusaka’s development could lead to an optimised decision-making process. Thus, a base map of Lusaka, Zambia was created.

And our creation isn’t limited to just helping Lusaka; developing this scalable and adaptable base map could go on to help and support other countries in their growth and development, across the world.

But one year on from that creation, we’d like to specifically focus on how our new technology helped benefit the government and people of Lusaka – and, the recognition we gratefully received for it.

What is the Lusaka base map?

This algorithm classifies and learns what the various features are, so when we pass imagery through, it produces a map based on the features it has been taught. That technology then automatically creates a map – quick, and accurate. Our advanced automated process can generate a new base map in a tenth of the time that previous traditional manual techniques would have taken. 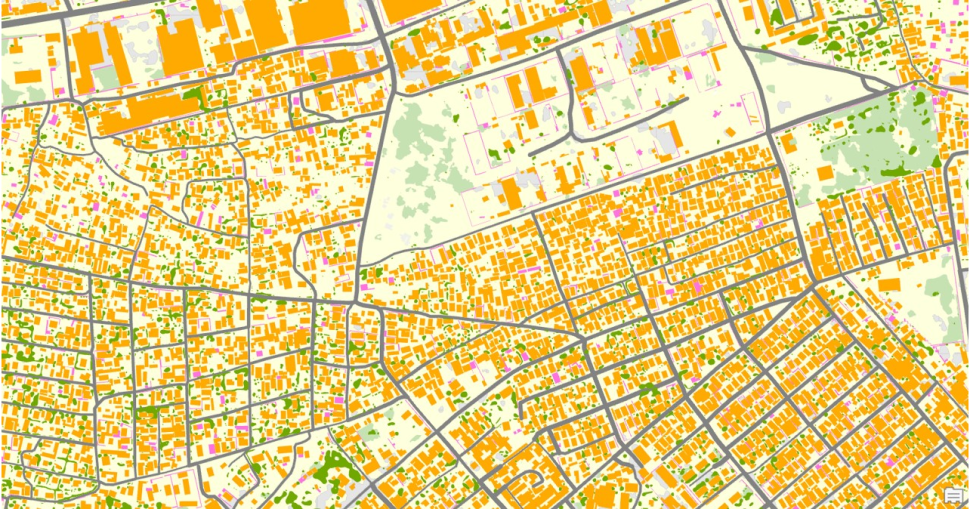 A visualisation of the Lusaka base map.

The development of the base map means it’s now possible to create a map of any area quickly and accurately from aerial, satellite, or drone imagery, to give planners a clearer picture of Lusaka’s rapid urbanisation. The land required for urban housing supply is unable to meet the demand, and led to high rate of urban informal settlements. Our base map provides insight into the extent and growth of informal settlements, and has been used for sustainable urban development planning.

Detailed mapping is essential for meeting the challenges of urban living and can be a powerful tool for transformational change in sustainable cities. Understanding the true nature of the real world leads to informed decisions that can improve quality of life for citizens.

Applying these digital maps, and in much shorter timeframes, enables the Zambian government to better plan their investment in critical public infrastructure and services such as sanitation and health facilities, as well as land administration, land tenure, safety and services, utilities and connectivity, and transport planning. Through this detail, the city can target gaps in critical public services, to help formalise the informal settlements which make up 70% of Lusaka’s population. All of which goes towards making a real difference to the living standards of those citizens.

The benefits, a year later

In short, the base map has unlocked new capabilities in geospatial analysis to support policy planning and decisions. The map will inform both the urban housing policy and climate change adaptation issues.

In addition, the base map can inform policies around carrying out land audits. Zambia has had a longstanding desire to complete a full land audit of the country – our collaboration, mapping, and technology can be harnessed to finally undertake this endeavour.

It has also provided the base for the information on settlement types, which in turn can benefit the future provision of services such as utilities in the informal areas. In developing Integrated Development Plans, at the local authority level, National Land Titling could benefit from the base map in identifying land-use types; especially within the informal settlements, as they are the main target area of the original programme

Unlocking these new abilities and capabilities in geospatial analysis can usher in the next generation of gathering critical insight, which could be applied in different sectors of the economy. Already, we have noticed key stakeholders that are interested in the use of the technology to quickly create maps to streamline decision-making processes, related to crucial aspects such as land-use change maps, building footprints, green spaces, informal settlement mapping, census and urban planning.

We’ve even seen a recognition of geospatial data as a base for economic planning and managing climate change mitigations and disasters.

Helping an entire nation realise the potential and power of geospatial data is a crowning achievement for Ordnance Survey; the knowledge that we are helping Lusaka to see a better place. And we are honoured that our efforts have been featured in significant events, and recognised by two industry-leading awards:

The project was featured at the recent Commonwealth Heads of Government meeting (CHOGM) – the biennial summit meeting of the de facto leaders from all Commonwealth nations, bringing together a unique community, one that values collaboration and innovation.

Towards the end of 2021, at the ninth instalment of Digital Leaders 100 (#DL100), OS earned the award for ‘AI Innovation of the Year’ in Sustainable Urban Development. Such a category was a perfect match for Lusaka base map project.

It also enabled Ordnance Survey – 700 nominations, 20 judges, 23,000 votes, and 100 finalists later – to win one of the most prestigious digital leadership awards in the UK.

Initiated in 2007, the Geospatial World Awards recognise exemplary practices in the global geospatial industry and have awarded more than 150 organisations in that time. Ordnance Survey and Zambia Ministry of Lands and Natural Resources has joined that prestigious list!

The Lusaka base map earned the Zambia Ministry of Lands and Natural Resources, the Urban Planning Award, in the Geo Excellence awards for ‘using machine learning for more effective urbanisation.’

And Ordnance Survey’s (award-winning) advancements in urban planning can be applied anywhere in the world.

Our creation of a scalable, replicable, digital base map is not only relevant to cities such as Lusaka. It has far-reaching benefits; nationally, regionally, even globally. It provides crucial information on aspects such as population and density, the number of built structures, the location of infrastructure including water and energy supplies. To better target investment. To improve the application and development of services.

And to help improve people’s lives.

OS’ technological advancements have made it easier and quicker than ever, for organisations to build their own rapid digital mapping capability. Building your own location data capabilities enables you to see how your specific city is used and how its citizens behave. Establishing a good baseline of geospatial maturity will help you make informed policy decisions and help you demonstrate the results of those decisions to citizens and investors.

But if your organisation currently feels underprepared, or unequipped to deal with such an undertaking, OS can also provide consultancy, and technology services. You can combine over 230 years of mapping expertise, with the speed and usability of modern (award-winning) technological innovation.

To deliver a solution that harnesses your city’s potential, visit os.uk/urbanisation to find out more.