Ben links up with current OS Champion, the endurance adventurer Sean Conway. Ben’s not the only new face to OS’s campaign. He and Sean are joined by 35 regional OS Champions, who are also tasked with motivating the public to GetOutside. 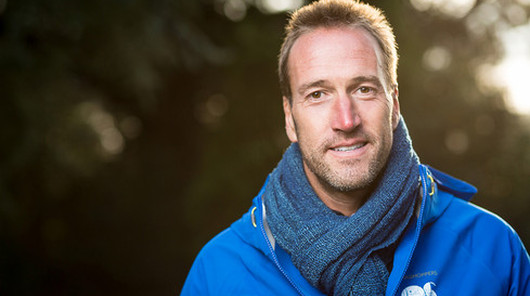 Ben, chosen by OS for his sense of daring and obvious love for the open-air, says: "There are some truly remarkable and inspirational people in this group, and it is an honour and delight to be joining them for what I think is an important campaign, making the outdoors enjoyable, accessible and safe.

"I urge people to spend more time outside. Whether that’s walking to work, even jumping off the bus a few stops before you’d normally do so, or using your holidays to trek through the Highlands; do it. You’ll feel better for it. When I’m outside I smile more. I push myself more. It’s the one place that’s repeatedly proven to be good for both body and mind."

Ordnance Survey launched its GetOutside campaign two years ago, after research showed British people are walking less. The results suggested a quarter of the British public won’t walk anywhere that takes more than 15 minutes and three quarters of us won’t walk to work or the shops. Last week Sport England released the results of its new Active Lives survey, with figures showing that 11.3 million people do less than 30 minutes’ activity a week.

OS GetOutside Marketing Manager, Liz Beverley, says: "The benefits of regular exercise and fresh air are known, and the GetOutside website is full of ideas and ways to do this, but for the health and wellbeing of the nation more needs to be done in communities to amplify the message that being outdoors is free, fun and good for you. We hope the adventures of Ben, Sean and the Champions will encourage more people to discover what lies beyond their doorstep and car."

Find out more about the GetOutside Champions.