The walking, running and cycling habits of a nation revealed

According to users of Ordnance Survey’s (OS) online and app mapping system, OS Maps, the Peak District village of Edale, is the nation’s favourite starting point for outdoor exploration. Edale, within easy access of Manchester and Sheffield, is the start of the Pennine Way (or its end, depending on which direction you’re walking it!). 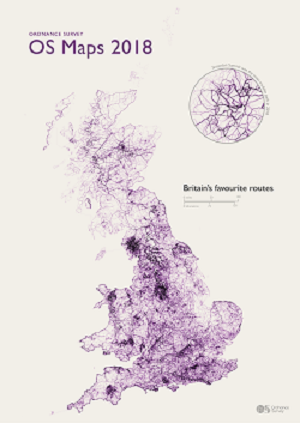 The Peak District National Park’s Head of Visitor Experience, Emma Stone, said: "It’s great to hear that so many people are enjoying the UK’s original National Park. Providing great opportunities to enjoy these special landscapes is one of the reasons why National Parks exist today. Edale is well known as the start of the world-famous Pennine Way and is surrounded by the iconic walks around Kinder Scout, Lose Hill and Mam Tor. Visitors can arrive in the village by train, which makes it really accessible and means you don’t need to worry about finding somewhere to park.

Throughout 2018, users of OS Maps created and publicly shared 818,524 walking and cycling routes for others to explore and enjoy. By breaking Great Britain down into square kilometres (280,435 in total), OS data scientist Andrew Radburn has been able perform analysis on the routes passing through each one.

In terms of the busiest 1km2 grid square in Great Britain, with the greatest volume of routes going through it, Edale features again. This time it is second to the summit of Snowdon in the list of busiest locations for the sheer number of routes passing through. Snowdon just edges Edale out with an impressive 2,370 routes compared to Edale’s 2,300.

Jason Rawles, Chief Adventure Officer for Aspire Adventures, and one of the original OS GetOutside Champions, says: "Snowdon, or Yr Wyddfa to give it is Welsh name, really is the mountain that doesn’t discriminate. It has something for everyone and is a wonderful lump of awesomeness. I’ve summited hundreds of times, and on the way up or down I’ve had the privilege of chatting with every size, shape, age, religion, colour, sex and type of person. Snowdon can be a wonderful kaleidoscope of humanity. Always prepare and be safety conscious. Disregard Snowdon at your peril, as she can bite, weather changes and routes tend to be harder than people think."

While Edale might be where adventure starts, and Snowdon is where most adventure occurs, Fairholmes, also in Derbyshire, is the most common point where it ends. For walkers and cyclists at the end of their journey, Fairholmes offers views of spectacular scenery and reservoirs that were used for practice runs by the legendary Dambusters air crews.

Hazel Earnshaw, Severn Trent Site Supervisor at Upper Derwent Valley says: "I’m not surprised that Fairholmes is so popular, it’s in a beautiful setting within the Peak District, with woodlands and stunning reservoirs that supply drinking water to Severn Trent customers across Derbyshire and Nottinghamshire. Fairholmes is set against the backdrop of the iconic Derwent Dam, where the Dambuster Squadron practiced their low-level flying for the historic Dambuster raids. It’s a great place to start or end your adventures in the Peak District National Park and offers miles of traffic free walking and cycling with amazing views over stunning countryside, all within a short drive of nearby cities Sheffield and Manchester."

Last year the average length of route created using OS Maps was 10 miles. The total length of the publicly shared routes totals 2.95 million miles, which if you walked 10 miles a day would take you 808 years to complete. The fantastic summer of 2018 is probably why May, June and August were the most popular months for people to create routes. Understandably, the National Parks are the most popular places to find routes (as you can see in the table below), but what is surprising is how the rest of Carmarthenshire, west of the Brecon Beacons, is one of the areas of Great Britain with the fewest recorded routes.

Nick Giles, Managing Director of Ordnance Survey Leisure, says: "OS Maps was launched in 2015, its users have added more than 2.4 million running and cycling routes. These routes can be viewed on a map, or as 3D fly-throughs and even in real-life Augmented Reality (AR) using the Tabletop 3D feature. Then when you’re out in the wild you can switch on an AR function to help you identify points of interest and landmarks on your horizon. To get outside as much as you can, whether that’s a short walk or bike ride around your local park, or something a little bit more adventurous, is one the best ways to enjoy physical and mental health. It’s free exercise that stimulates the senses and heals, and we are on a mission to encourage more people to get outside more often by making outdoor activity more enjoyable, accessible and safe for people of all ages and abilities."