Since the service’s 2012 launch, around 111.5 million sq km of Custom Made maps have been ordered and printed through OS’s online service. That is enough maps to cover the surface of Great Britain 532 times or the moon three times over. While almost every inch of Great Britain has featured on a Custom Made map at some stage, Foula, which is of a similar size to Winchester, is the only place not to have been given that treatment. That is until now, as OS has presented every resident with a Custom Made map of the island. 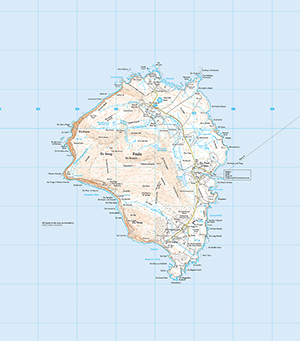 Sheila Gear, Foula’s Post Office manager who is distributing the maps to residents, says: "It was a pleasant surprise to receive the maps from OS, and to now be part of OS’s story. I’m a big fan of OS and its maps, and twenty years ago I actually even helped the OS surveyors map the island when they visited. Foula has a strong community, and it has many beautiful areas and an abundance of wildlife. I recommend a visit, but do bring a map!"

OS launched its Custom Made map service to allow its customers to generate their own personalised OS Explorer or OS Landranger flat or folded maps. A great gift for the hard to buy for, the service gives you the power to centre the map on the location of your choice, and you can also give your map its own unique cover and title. Yet no one had done this for Foula.

Closer to Norway than either Edinburgh or London, Foula is described on various travel websites as ‘one of Britain’s most remote inhabited islands, with a population of around 30’. It’s situated 172 km north east of the Scottish mainland, and is part of the Shetland Islands, which with the exception of Foula have all been covered at some point in OS’s Custom Made maps.

Ordnance Survey Consumer Product Manager, Paul McGonigal, says: "Custom Made maps make terrific gifts for outdoors people and for anyone wanting an original way of capturing a memory, say a holiday, a wedding or a favourite walk with your dog, and so on. So, as part of our process to improve this service by possibly introducing new elements, we began examining the existing data behind it in finer detail.

"To think our customers have collectively covered almost every bit of Great Britain is fantastic. There are other equally remote areas of Great Britain that have been covered in Custom Made, so we’re at a bit of a loss to explain why Foula is the exception. I don’t know much about the area, only that I’ve read it has been designated as a special protection area for birds and is a site of special scientific interest for its plants, birds and geology and runs off a different calendar to the rest of us. Maybe as part of our GetOutside initiative people will now be inspired to explore Foula and report back their findings!"

As part of the analysis, the OS Data Viz team produced a series of visualisations on customer sales. To view some of the visualisations visit: https://www.flickr.com/photos/ordnancesurvey/

To get your very own Custom Made map visit: os.uk/custommade