The endurance athlete, who represented Great Britain at both the London 2012 and Rio 2016 Summer Paralympics, took part in the wheelchair race and came 14th in a time of 1hr 58min 24 secs. She was the second British woman to cross the line in her event. 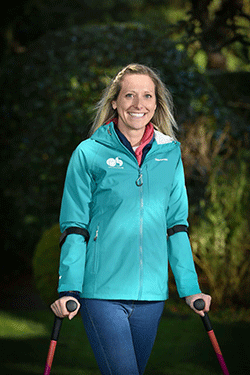 Mel was selected by Ordnance Survey earlier this year as a GetOutside champion to inspire people to spend time outdoors.

Her appearance at the marathon is typical of the mindset she has had for being outside – whatever the circumstances.

Mel said: "A lot of people feel they face barriers to getting outside and being active. Whatever they are; whether it is disability, health, social, age or gender or financial, you can still find a way to overcome them; not limit what you do because of them. Sometimes you just need a bit of support, a bit of guidance to get out there and see what is possible."

Mel’s life was turned upside down following a series of strokes with an associated heart defect. The last stroke in 2008 left Mel unable to walk unaided and using a wheelchair, having lost use of much of the use of her left side and balance and coordination. Mel underwent corrective heart surgery in 2009.

It was while in hospital, after suffering her last stroke, that Mel vowed to herself she would not let these setbacks get in the way of her love for the outdoors.

She said: "You have to be brave. When I was in hospital following my last stroke, and I was lying in my hospital bed desperate to get out of those four walls, I didn’t know what my recovery was going to be. If I was going to recover? Or how long it would take. But I thought ‘well there is nothing to stop me doing something. What can I do?’ So originally I planned to make a big trip and see just what I was capable of. I didn’t know how I’d do it, how long it would take me, and to be fair that trip didn’t happen straight away and it wasn’t the really big adventure I’d first planned, but that didn’t matter. It was always my goal. In many ways it was perhaps bigger. When the time was right I made a plan. That plan was Scotland, I’d never been there, I didn’t know where to go. I looked at a map, put a finger down on it and that was it."

Her spirit for adventure has always been a part of Mel, since as long as she can remember. Following her strokes, Mel set on a new road of adventure when she followed her path to become a wheelchair athlete.

She began competing in 2010, and two years later represented Great Britain in the T34 100m and 200m at the 2012 Paralympic Games in London in wheelchair racing. As part of the GB Athletics team, further successes followed. She broke the 1500m T34 world record in 2013 and again twice in 2014, won 800m World Silver at the 2015 IPC World Athletics Championships, and represented Great Britain for ParalympicsGB once again in the T34 800m at the Rio 2016 Paralympics.

Off the back of Rio, Mel made the switch to endurance to follow her marathon dream in wheelchair racing and switched to the GB Cycling team for handcycling in time trail and road racing. Last year was her first season in the sport, proving her place in world class cycling with two bronze medals on the international circuit and national titles. Mel will be preparing for the UCI paracycling World Championships in Italy this August.

Mel trains six days a week, five or six hours a day, combining road training on her handbike and in her racechair (Dolly) with weights sessions in the gym and cross training such as outdoor swimming, climbing, and yoga.

Mel said: "I’m happiest when I’m outside. I’m lucky that I get to take my training on the road, wherever I want to within reason. When I don’t have to be at competitions, I base myself out of my camper van. I put my bike, my racechair, my wheelchair, my crutches, my boat and everything else in the van and head off to the coast or national parks. The Hebrides are my favourite islands to travel to and base from. Even in the off season I am on my bike. I’m going up the mountains, coming down the mountains a bit quicker, going around the whole islands if I can."

Away from the road, Mel loves to get out in the sea or up in the hills and mountains. She’s a keen kayaker, wild swimmer and climber. Once the season is over, Mel plans to push the adventure side of things, planning some longer cycling trips and pushing her own boundaries.

Mel said: "Just start the journey. Take the drive, get on the ferry, start day one and go from there. Be brave and enjoy it because you will never, ever regret it."