Anyone who reads our blog will know that we’re big fans of the trig pillar, and we love hearing from our followers on Twitter and Facebook when they share their trig pillar photos with us.

We thought we knew a fair amount about the humble trig, but we bow to the amazing knowledge of Britain’s top trig-bagger, Rob Woodall. We came across Rob after he made it into the book, Dull Men of Great Britain, celebrating the fascinating people, mundane hobbies and particular passions that inspire the Dull Men’s Club. Today he shares with us his love of the trig and when he’s going to complete his 14-year quest to bag all of Britain’s trig pillars.

Next spring I’m due to bag my last British trig pillar. The OS built some 6,500 of these, excluding on-site replacements, and some 300 have since been lost to housing development, farming, coastal erosion and other causes. 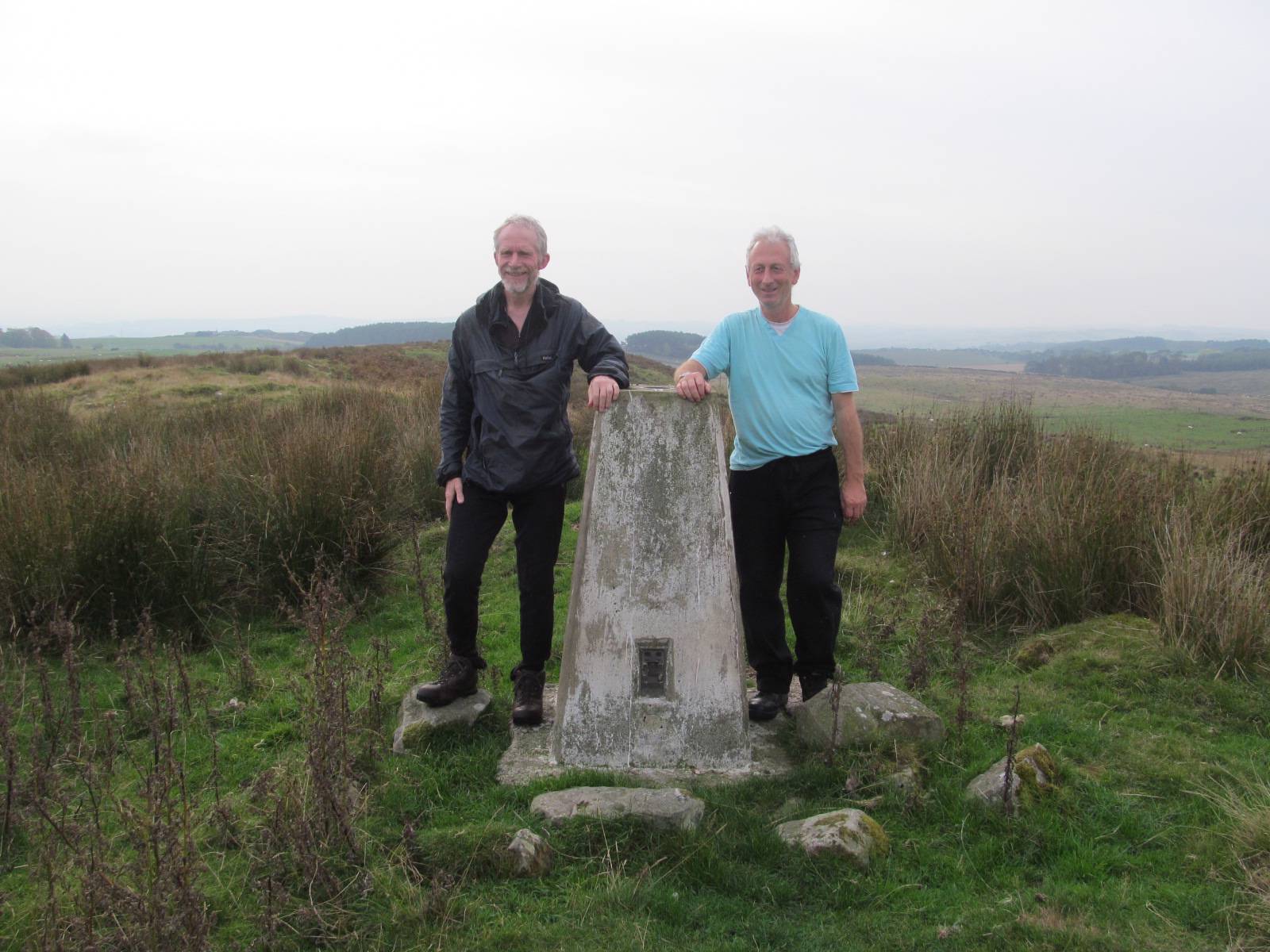 I wonder how long people have been ticking them off and who was first to start a list. There are currently 44 people with more than 1,000 pillars to their name. I’ve been hillwalking since the late 1970s and whilst I was ticking off Munros and many other kinds of hills, it somehow didn’t occur to me to collect trigs. The first listing I came across was by Dave Hewitt, editor of The Angry Corrie hillzine. This was produced by poring over Landranger maps and noting the locations of the little blue triangles.

Being a hill man, Dave decided he was going to bag one of each height (height as marked on the LR map). I’m based in the flatlands of Peterborough with a shortage of hills, so this struck me as an interesting project. In addition to the celebrated Little Ouse pillar (-1m on the map – yes below sea level), 1, 2, 3, 4, 5 and 7m are to be found in the Fens (you have to dodge out into Yorkshire for a 6m pillar). The higher pillars are all on mountaintops of course (Ben Nevis at 1344m topping the list) but the lower pillars are in all sorts of places – a few dozen have even ended up in people’s gardens (the trigs were there before the gardens – mostly).

The little mapped triangles aren’t always easy to spot and Dave Hewitt was mostly working on Scotland, so we set about compiling a comprehensive British list. OS helped with names, heights and flush bracket numbers – trig-bagging gold! Jonathan Russell input this data into a spreadsheet. This became the Trigonomy database, which is still going strong today, now maintained by Graeme Paterson (although it’s unclear why, as Graeme carries all the FB numbers in his head!). Graeme worked closely with OS to obtain details of the construction and demise of many pillars. Jonathan also set up the popular and informative Trigonomy internet forum.  The TrigpointingUK website is another key resource – and the site for the serious trig bagger (Haroldstreet is another). In September 2002 I finally gave in to the inevitable and started logging my finds online, collecting flush bracket numbers, taking notes and photographs.

The flush bracket is essentially a way of accurately defining a height above sea level (the datum line is the horizontal line above the upward pointing arrow). An upmarket type of benchmark (BM). Most BMs are simple cut marks (distinctive arrow marks cut into houses, churches, bridges and other structures). There were also a few projecting brackets installed. But being projecting, they tended to get broken off. So the OS soon settled on the flush bracket (FB) (flush with the wall – much safer) for the more important level control points. FBs were installed in most trig pillars – although the OS did go through a no-FB phase, with quite a few of these (rather dull) pillars in Scotland.

FBs were also installed on many other structures (non pillar flush brackets – NPFBs as they are known in the bagging trade). Having serial numbers, FBs are eminently tickable! The place to log NBFBs (and indeed all OS bench marks), is bench-marks.org.uk. NPFBs are arranged along levelling lines, radiating out from Fundamental Bench Marks (FBMs). FBMs are (mostly) neat granite blocks at roadsides, located in geologically stable places so they won’t subside. And while they seem like trigs, they are actually benchmarks. The levelling lines link the FBMs to a series of tide gauges, where the sea level measurements were determined.

So trig bagging isn’t quite as simple as you might think. In fact, the pillars are outnumbered by other types of triangulation station including bolts, blocks, rivets, Berntsens, Fenomarks and Curry Stools. The latter is a Y shaped flat concrete structure designed to sit on peaty ground without sinking – seemingly a good idea although only nine were ever built, but even so, quite challenging to bag as they tend to be in quite inaccessible places. In addition to the trigs which were designed to have an instrument (theodolite) set up over them, the triangulation network also includes Intersected Stations – structures such as church spires, chimneys and lighthouses. These were just sighted from other trigs – even with a good head for heights you wouldn’t want to set up an instrument on top of them! These various types of trig station total around 25,000 locations (although several have a number of trig marks, e.g. a flagstaff, bolt and vane all on the same church tower). 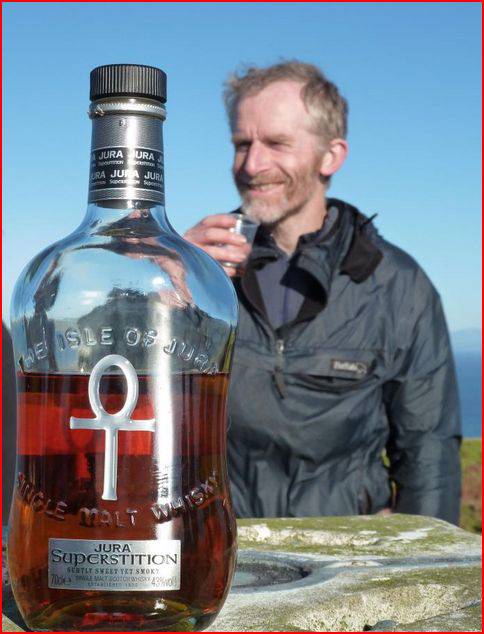 In modern times, most trigs have been rendered redundant by GPS technology. A few hundred pillars were used as part of the GPS control network, as Passive Stations. The other Passives are generally Bertsens, Bolts in concrete blocks, or Rivets in concrete. These are sometimes buried, and finding them can be quite tricky, requiring the OS sketch map (if it still exists), a GPS unit and often the comments and photos by previous finders. The most modern installations are Active Stations – around 200 devices which are typically fixed to roofs of buildings and communicate constantly with the GPS satellites. The majority of these can only be bagged by sighting them from a distance.

About the humble trig pillar

Complete OS legacy archive datasets have in the last few years been obtained for all 35,000 trig marks and 540,000 bench marks– enough to keep the bagging community busy for a long time! However, for most, trig bagging is about the pillars. After all, it’s these that are marked on the Landranger maps. Most pillars are of the standard Hotine design; the remainder are stonebuilt (some are beautifully made; Wales has a circular one) or Vanessas (cylindrical, said to be named after the company Vanesta who manufactured the thick cardboard formwork for the concrete – a scaled up version of their main product which was toilet rolls!).

While the majority of the pillars were put in for the Retriangulation of Great Britain (starting with Cold Ashby in 1936), quite a number were put in for other purposes and omitted from the maps. One such was the Great Glen Project , which involved a dozen pillars installed around Fort Augustus in Scotland to enable the movement of the Great Glen geological fault to be precisely monitored. Another was Project Emily, a cold war project which involved installing pairs of trig pillars across Lincs and East Anglia to enable accurate construction of an array of Project Thor missile launching sites. A few pillars were installed for major civil engineering projects such as The Channel Tunnel; the Admiralty installed six as part of their work to chart the Scottish coast; even a former British Leyland factory in Cumbria has one. 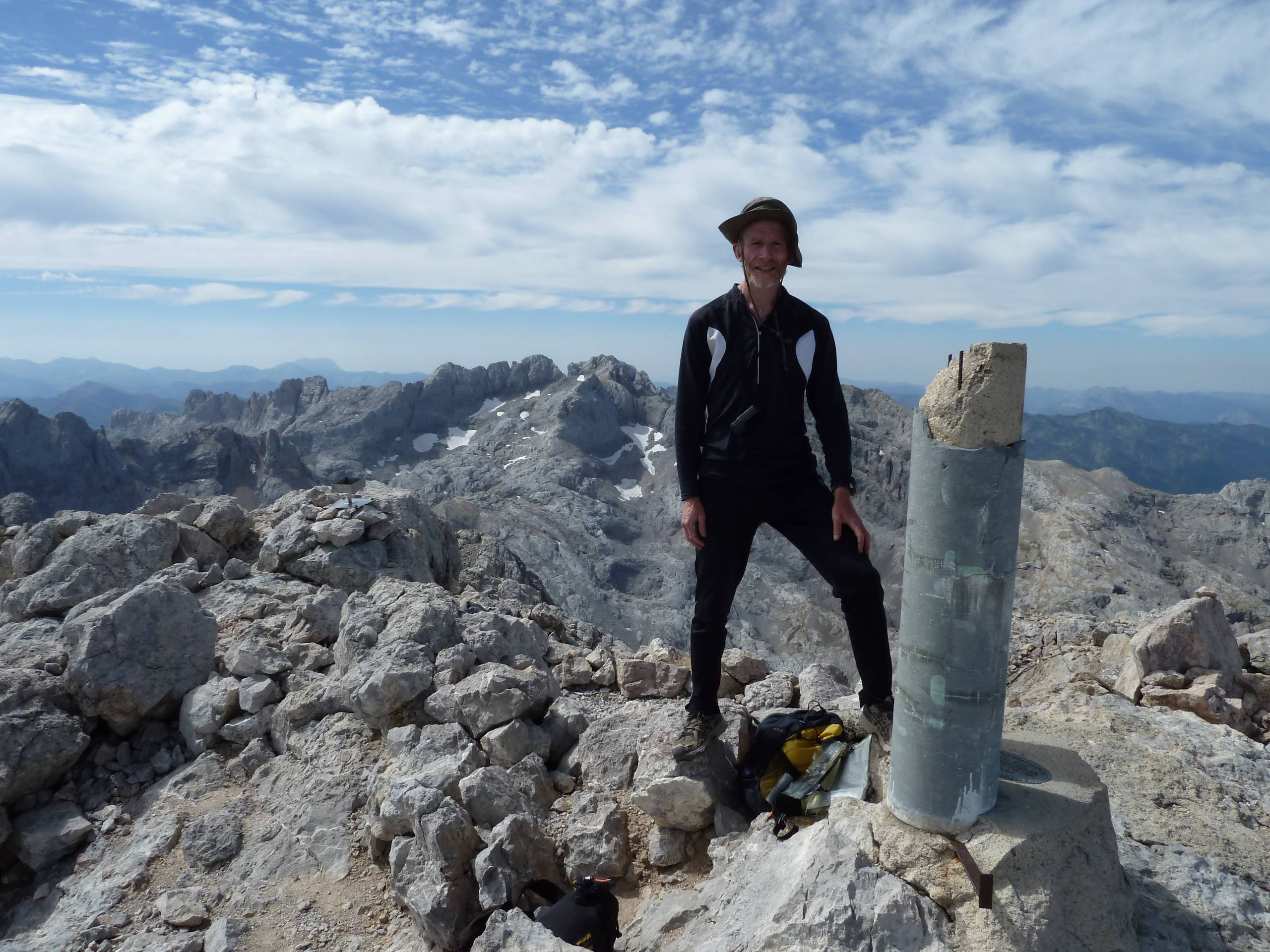 Rob also bags trigs outside Britain. Thanks to Geoff Pettengell for this photo from Spain.

How many trig pillars are there? It’s impossible to say. Over the years, many have been destroyed, while several thought to have been destroyed have been rediscovered, whether lying in hedgerows, languishing in farmyards or even relocated into people’s gardens. Some fascinating discoveries have been made over the years. Many of these have come to light thanks to the research of Rod Sladen who spent many hours at OSHQ working through the trig lists and files. However, a few still come to light by chance.

A friend who works at the Faslane naval base in Western Scotland, once mentioned that he has a trig point outside his office window! It’s the genuine article – evidently the twin of the Loch-na-Brae pillar which is improbably located in woodland on the far side of the loch. The pair will have been used during construction of the Faslane base. Sladen’s researches had identified Loch-na-Brae, but its Faslane opposite number was a new find. As recently as August 2015 a “new” pillar was reported on Larkhill Artillery Range in Wiltshire. This area has form – a decade earlier a pillar was unexpectedly discovered a couple of km away, unknown from the records and still referred to by the made up name of Bustard North-east (it being north east of the officially-named Bustard pillar).

My fourteen year quest has notched up 6,188 trig pillars. They have taken me all over the country, to its highest mountains, into thick spruce plantations and dense thorny thickets, to the beauties of the Scottish islands, to autumn stubble fields, to the Victorian “Palmerston Folly” forts of the south. Recent years have seen trips with friends on chartered boats to reach some of the less accessible islands – just this year the iconic hard-to-land Dutchmans Cap in the Treshnish Isles of the far west was bagged on a very lucky day between storms. While my last pillar on a Fife hilltop next April should have no such difficulties, the legacy of the OS’s mapping and levelling work over the last century or so means there’s no shortage of things to look for, of targets and surprises, enough for a lifetime.

Keeping our fundamental benchmarks in order

Most people are familar with trig pillars, however there is another co...

Keeping our fundamental benchmarks in order

Most people are familar with trig pillars, however there is another considerably more elusive type of pillar to be seen across the land.