There’s no end to the range of uses for maps – and not just for walking or planning either! Earlier this week, we debuted our maps for colouring in and now we’re talking about Minecraft maps after seeing two new releases this summer…

It’s been almost two years since the OS Minecraft map of Great Britain was released, with 22 billion blocks representing the 224,000 square kilometres of our country. In the first few months after the release, our Minecraft map was downloaded over 50,000 times. It even won us a Guinness World Record as the largest real-world place represented in Minecraft!

Last year we updated the map with more detail, taking it to a staggering 83 billion blocks. Joseph, creator of the map, used 1:25 000 scale OS VectorMap District to give a smoother, more expansive appearance that is closer to real life. It added new features like local roads, using our in-house colour classification system, so motorways appear as blue for instance. The water features now appear in sharper detail; too, so you can see individual streams and tributaries coming off rivers. The forests and woodlands are now populated with generated trees, and the national rail network has been added. 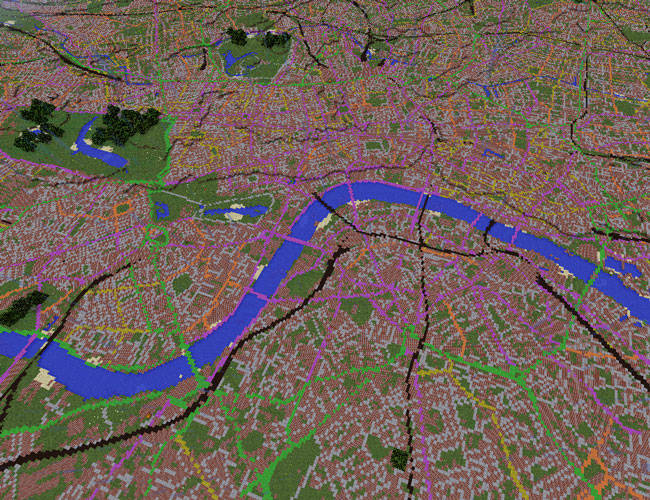 London shown in our Minecraft map.

With over 100 million registered users in the Minecraft community, there is always demand for new uses for the technology. Joseph’s original map has been highly praised by parents and teachers for being a way of engaging children in learning about geography. We even inspired the Danish government to produce its own Minecraft map, and there’ve been two further Minecraft map developments this summer too.

The British Geological Survey (BGS) reproduced the 2D geology of mainland Great Britain and surrounding islands within the world of Minecraft back in 2014. Their map showed the OS map data on the surface and the rough position of real geology beneath, repeated down to the bedrock. This summer, the BGS took another step into the world of Minecraft by creating three-dimensional representations of geology at York, Ingleborough and West Thurrock. The models show how the geology rises and falls, overlaps and folds and at different depths. BGS even used blocks which best resembled the ‘real’ geology, based on colour, texture and hardness. For the three dimensional models they decided to use glass blocks that were coloured by their traditional geology map colours. 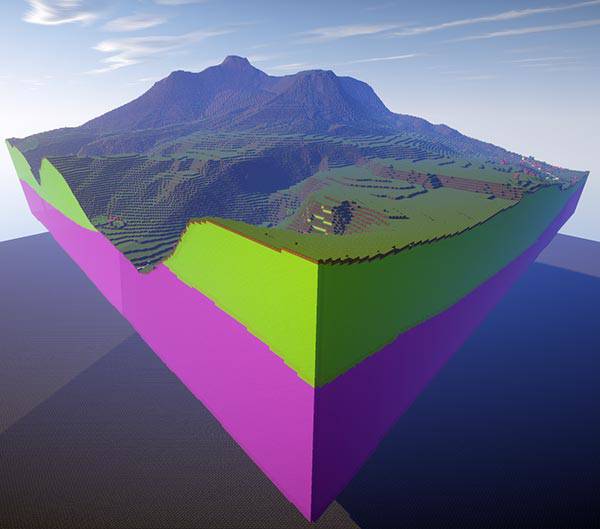 Land & Property Services (LPS) developed a free downloadable Minecraft map for Northern Ireland using Ordnance Survey of Northern Ireland (OSNI) digital map products. Their consists of over five billion blocks and equates to an area of almost 14,000km² covering all of Northern Ireland. In the month or so since the launch, LPS has seen over 4,300 downloads of the map. LPS used a custom built computer programme developed by our very own Joseph Braybrook to create the Minecraft NI map. 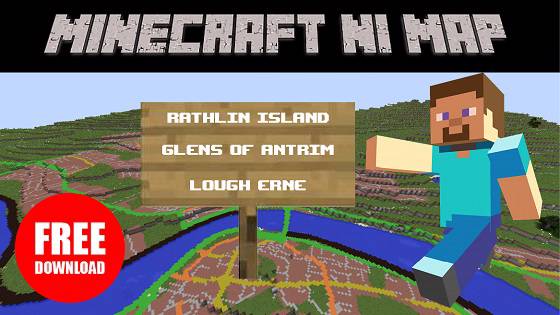 See more examples of the data in our Flickr album and even take a tour around our Minecraft world in several YouTube videos:

The Minecraft map is no longer available for download.

Joseph Braybook, one of our summer interms, spent some of his time bui...

Joseph Braybook, one of our summer interms, spent some of his time building a Minecraft world using OS OpenData products.

Created using NASA open data and made to a 1:4,000,000 scale, our GeoDataViz team applied our style of mapping to Mars.