Our most iconic maps, the pink OS Landrangers and the orange OS Explorers, have been used by walkers, cyclists, climbers and many more for decades – but maybe not for as long as you would think... 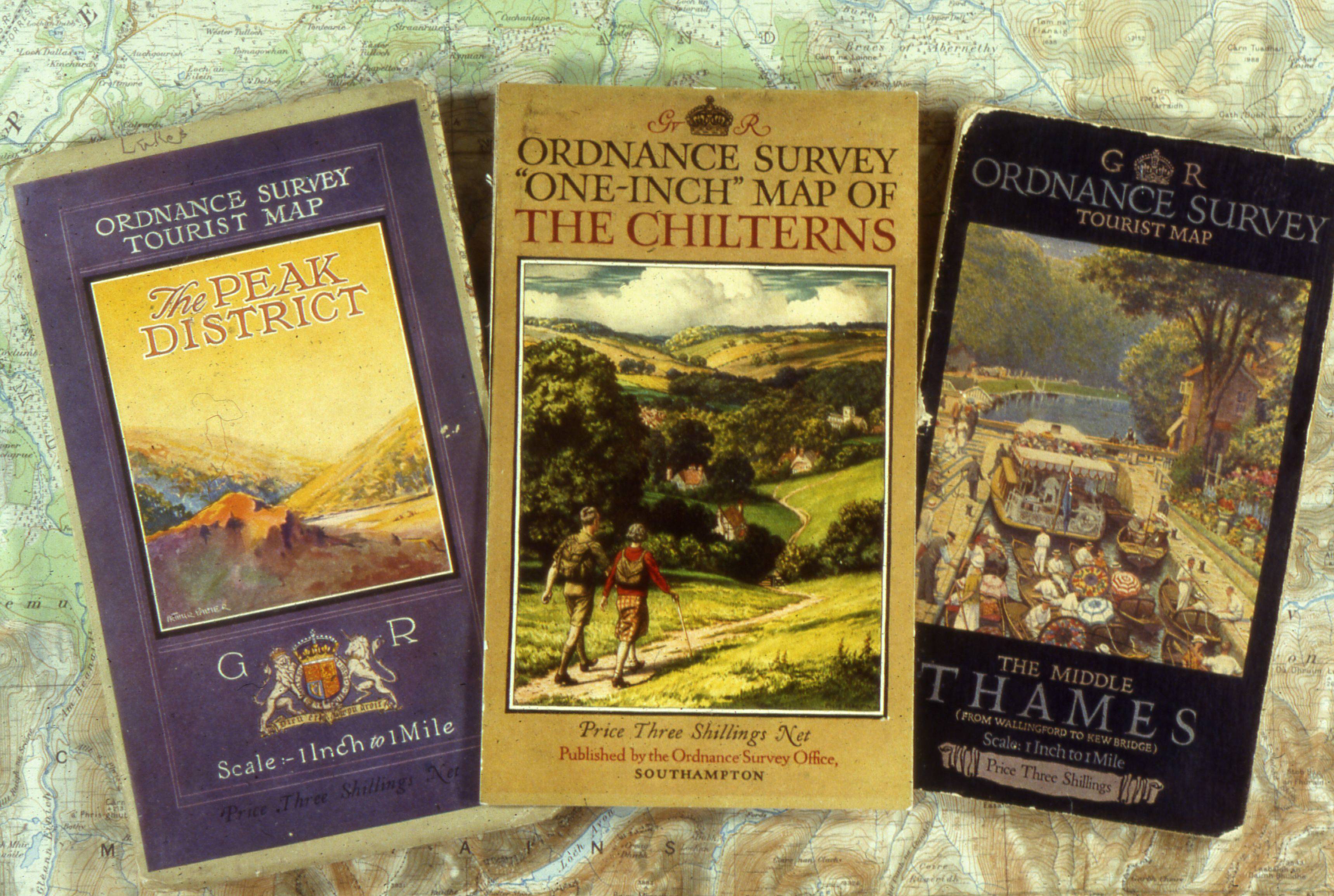 A selection of maps from the 1930s, including the Ellis Martin covers.

While OS was founded back in 1791 and we published our first map in 1801, maps for the general public didn’t seriously take off until after the First World War. Although interestingly, some of our best-remembered map covers predate this period, with their beautifully illustrated covers by Ellis Martin. After the war experimental maps at the familiar OS Explorer Map 1:25 000 scale (2½ inches on the map being equivalent to 1 mile on the ground or 4 cm to 1 km) were produced with the idea that students could use them to learn about geography and that if this was popular, it could be extended and made more widely available for outdoor enthusiasts too.

The origins of the OS Landranger series go back to 1801 and the map of Kent which was produced at one-inch scale, with the whole of Britain being completed by 1887.  These were followed by a number of series with different formats and specifications until 1945 when the New Popular Sixth Series was started, each sheet covering an area of 40 x 45 km and incorporating the National Grid. The need to conform with the government’s metrication programme in the 1960s saw the birth of the 1:50,000 scale map, with the First Series of 204 sheets published in two blocks, in 1974 and 1976.

By the 1970s, with the interest in outdoor pursuits and spending time having grown over time, it was the right time to push the interest in 1:25 000 scale mapping and in 1972 the first Outdoor Leisure map was published of the Dark Peak area of the Peak District. OL1 was followed by other OL maps on the national parks and areas of outstanding natural beauty. The success of these maps lead to the development of the Pathfinders series, with those covering England and Wales showing all public rights of way. It was now possible to plan walking routes without trespassing.

By the 1980s, the Second Series of 1:50,000 maps had seen additions such as metric contours and tourist and Forestry Commission information. This was followed by the inclusion of tree symbols, depiction of foreshore categories and grid numbers on the body of the map – and the name Landranger was used for the first time. The series today covers the whole of Great Britain in 204 maps and provides all the detailed information you need to get to know an area.
In the 1990s, Pathfinder maps remained popular, but work continued to make the range more user-friendly with the first Explorer maps in 1994, covering parts of the Chilterns, Mendips and Northumberland. These new maps covered three times the area of the Pathfinders, giving users much more mapping for their money. The additional tourist and leisure information added to the maps meant that people could find out exactly where every footpath and bridleway would take them. They could clearly see national park boundaries, sites of antiquity, youth hostels, viewpoints, pubs, schools, country parks, gardens, picnic sites and more. They could plan their activities down to the nearest phone box and public loo!

Today in 2015, we’re moving to a new look and feel for our paper maps. You can see the full current range of OS maps on our website.

Yes, there are 607 OS paper maps of Great Britain for you to choose fr...

Wimbledon got off to a flying start on Monday, and as much as we love ...

Yes, there are 607 OS paper maps of Great Britain for you to choose from, but did you know there are also infinite Custom Made maps you can order?

Wimbledon got off to a flying start on Monday, and as much as we love tennis, our minds inevitably turned to maps.