It’s safe to say that most Britons are fans of the coast and there’s a good chance that you’re aware of coastal change to some degree. Whether it’s investment in coastal defences, cliff falls or erosion impacting landowners, coastal change often hits the news.

Great Britain has tens of thousands of kilometres of coastline, which is a key resource and home to communities, businesses and infrastructure – as well as being a great place to holiday. Looking at Scotland, around 20% of the population live within 1km of the coast, that’s around 1 million people. Yet 19% of the coast is erodible or ‘soft’.

What does that mean for the coast? According to Dynamic Coast it means that thousands of assets are at risk. Within just 50m of the Scottish coast lie 34,000 buildings, of which 72% are residential properties. You also have 1,300km of roads, 100km of rail networks and 600 natural heritage sites.

In 2015 the CREW-funded research started and since then we have been working with partners, led by the Scottish Government and Scottish Natural Heritage. Roseanna Cunningham MSP, Cabinet Secretary for Environment, Climate Change and Land Reform, launched the Dynamic Coast in August 2017 and thanked OS for being a partner and updating our coastal data to meet the project requirements.

The researchers at the University of Glasgow needed to establish what is erodible and what had already eroded. They managed this through extracting 3,800 km of georectified coastline position from OS 2nd Edition Country Series maps (1892-1905) and to then compare it to both the 1970s and the current coastal position (updated by OS maps and LiDAR datasets where available) to estimate historical and recent erosion/accretion rates. Using the recent coastal change rates the coastline position has been projected into the future. Using the erosion rates combined with a number of socio-economic datasets, key assets at risk from future coastal erosion have been identified. 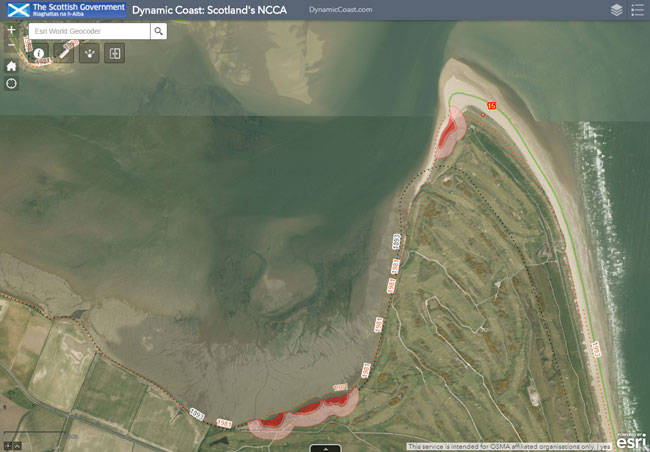 What did Dynamic Coast find out?

Looking at the map evidence across time, the team identified that more coast is experiencing erosion and that where it happens; it’s twice as fast as before. These assessments identify at least £340m of coastal assets are at risk by 2050 if recent erosion continues. However over £13bn of assets are protected by beaches and dunes, our ‘natural defences’. Contrasting this, £5bn of assets lie behind man-made defences.

As coastal flooding and erosion often operate together, they need to be treated together. Dynamic Coast can help the public sector, business and communities work together to make more sustainable planning decisions, increase resilience and help us cope better with climate change.

Dynamic Coast Project Manager Dr. Alistair Rennie said that: “Working closely with the OS, we have appreciated changes to Scotland’s coastline at a level never achieved before. Dynamic Coast informs the public sector, businesses and communities of the past changes and future implications of coastal erosion, as climate change continues to affect our coasts.”

Where can I find out more about Dynamic Coast?

Head to www.dynamiccoast.com to read more about the work and see the interactive maps showing coastal change around Scotland. The strategic assessment tool uses OS data, including coastal topographic data and tide lines, to assess and predict rates of change and identify areas at risk.

We continue to work with Dynamic Coast on the next phase of the project. You can see more about our Public Sector activities on our website: https://www.ordnancesurvey.co.uk/business-and-government/public-sector/index.html

Capturing the changes in Britain's coastlines quickly and ensuring our...

As a result of the beast from the east snow, our assistance under our ...

Our MfE service was used when a major incident was declared at Toddbro...

Capturing the changes in Britain's coastlines quickly and ensuring our data reflects the current coastline is just one of our many challenges.

As a result of the beast from the east snow, our assistance under our Mapping for Emergencies (MFE) service was required.

Our MfE service was used when a major incident was declared at Toddbrook Reservoir in Derbyshire.