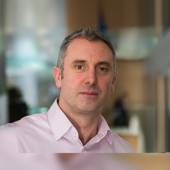 In October 2013 Nick took on additional responsibility for retail business at OS and in September 2015 also took on the executive responsibility of Director of Marketing & Communications. He became a Non-Executive Director of Dennis Maps Ltd in December 2015. Nick now leads all consumer activity within OS with the focus on helping more people to get outside more often.

In May 2018 Nick also became a Board member of the UK Outdoor Industries Association and is now the Chair of the Association.

Nick’s background is in Consumer Financial Services, holding senior management roles at RSA, LV= and Aviva. Prior to joining OS, Nick ran sales and marketing for the RAC, the UK’s second largest breakdown organisation, where he was responsible for a department of over 250 FTEs and a marketing budget of £25m+, delivering a business portfolio of over £300m per annum.

Before entering the financial services industry, after graduating from UWE Bristol in Marketing, Nick worked in and owned a number of direct marketing agencies.

Nick is an avid outdoor enthusiast, an enthusiastic mountain biker and is passionate about the benefits of an active outdoor lifestyle.

In January 2022 he was awarded an OBE for his work in improving the health of the nation.

All directors
About Ordnance Survey