Where is the centre of Great Britain?

One of the most common questions we are asked in Ordnance Survey’s Press Office is ‘where is the geographic centre of Britain?’ Most recently, the BBC got in contact with us, framing their article around the question of Scottish Independence and the effect that would have on the centre of Great Britain.

The question continues to bubble up as it always has been a contentious issue with many differing views on locations – and even how you define the centre, define Great Britain, and how you measure it.

As you’ll see in the BBC article, the town of Haltwhistle in Northumberland proudly proclaims itself to be the centre of Great Britain as it is mid-way along the mainland’s longest line of longitude; and there is a stone cross in Meriden, near Coventry, claiming to be the geographical centre of England. Some people claim the point farthest from the sea must be the centre (a spot just east of Church Flatts Farm, about a mile south-east of Coton-in-the-Elms, Derbyshire), but others don’t think this can accurately be called the centre…so, where is the centre of Great Britain?

The truth is, that there can be no absolute centre for a three dimensional land mass sitting on the surface of a sphere and surrounded by the ebb and flow of sea water. If you consider the movement of tides on a beach, the shape of the object will change on a constant basis. Another contributing factor is how far you consider the coast to stretch up river estuaries. Different projections, scales and methods of calculation will all produce different results.

How do we measure it?

What do we define as Great Britain?

We take it as the mainland and the 401 associated islands shown at the 1: 625,000 scale of mapping. This works for us at Ordnance Survey as it reflects the full extent of our geographical remit. We made the calculation by linking our 1: 625,000 database with a computer programme based on the gravitational method.

If you want to find out more about the difference between Great Britain and the United Kingdom, visit our previous blog.

Where is the centre of Great Britain?

Working on the basis above, the centre is a location 7 km north west of Dunsop Bridge, Lancashire, by Whitendale Hanging Stones on Brennard Farm in the Forest of Bowland (SD 64188.3, 56541.43). 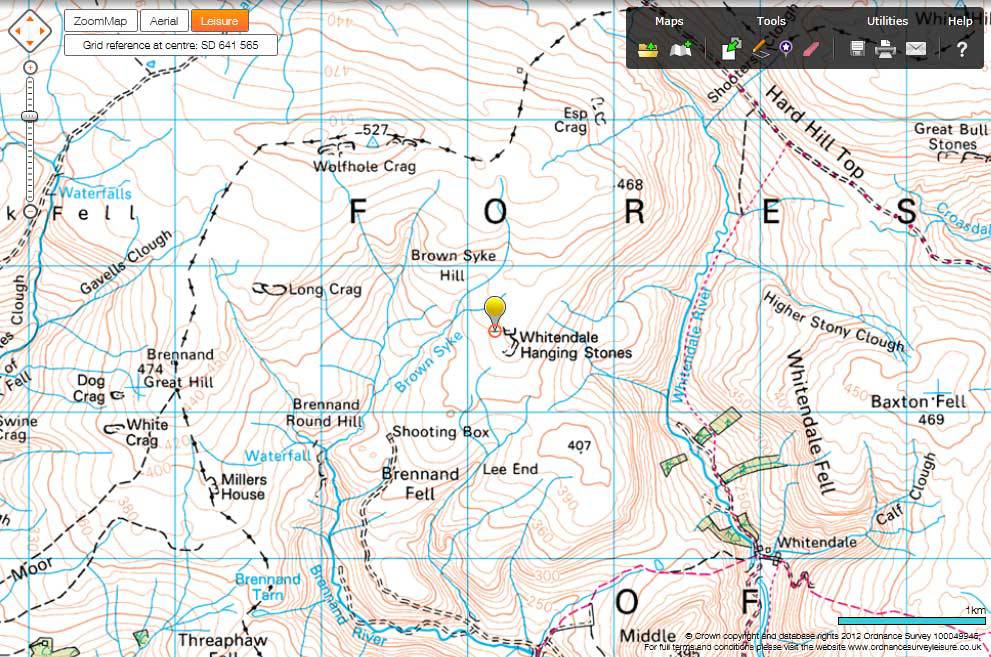 Looking only at the mainland of Great Britain, the location is 4 km north west of Calderstones Hospital near Clitheroe, Lancashire. The mainland result confirmed the findings of analogue experiments carried out by a Brigadier Winterbotham, reported in the Geographical Journal in 1941.

However as with all such calculations, the level of accuracy is limited by the scale of data used. At the 1: 625 000 scale, the precision of the reference will be to a few hundred metres.

As we’ve said above, any claim to be at the centre is open to interpretation and we’re completely relaxed about that. The location of Britain’s true centre may never be entirely clear but the calculations we have made are as close as we feel we can get to answer a question that is likely to generate debate for many years to come.

In the meantime, take a look at all of the centres that we have calculated using the gravitational method:

Centre of Great Britain – the computer calculation resulted in a location 7 km north west of Dunsop Bridge, Lancashire, by Whitendale Hanging Stones on Brennard Farm in the Forest of Bowland (SD 64188.3, 56541.43).

Centre of England – on Lindley Hall Farm, owned by the Farmers. To be precise, it puts the centre at grid reference SP 36373.66, 96143.05. (The islands of England were included in the computer calculation).

Centre of Scotland – the location is between Blair Atholl and Dalwhinnie. Grid reference NN 66784.93, 71599.4. Just three kilometres to the west is the beautiful Loch Garry and Dalnaspidal hunting estate.

A common mistake people make in this country is to confuse the UK with...

A common mistake people make in this country is to confuse the UK with Great Britain, so we thought we'd clear it up once and for all!